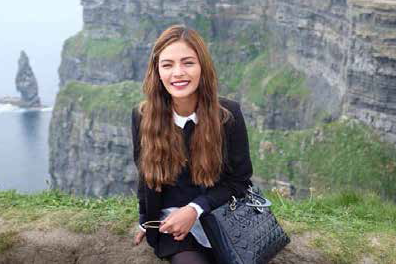 Lovi Poe paid tribute to Susan Roces as she talked about her on ABS-CBN’s morning show “Magandang Buhay” on Tuesday.

“We did lose a gem sa industriya na ito and she’s our queen. The Queen of the Philippine Movies. We just have to be grateful that we were given a chance to witness her movies and the kind of person that she is. At ako I am just very glad na nabigyan ako ng opportunity to spend some time with her because she’s an amazing woman talaga. Queen-like talaga,” Poe said., recalling that she was able to visit and say goodbye to Roces before she passed away.

Lovi, daughter of the late Fernando Poe Jr. with former actress Rowena Moran, when asked to react on the death by show host Judy Ann Santos, said, “I think it was a very sad time but I got to see my ate (older sister) Grace and the whole family. It seems like they are very positive in a such a way that they know someone’s guiding them from above.”

“I’m very glad na nabigyan ako ng (that I was given the) opportunity to spend some time with her because she’s an amazing woman, queen-like,” Lovi added.