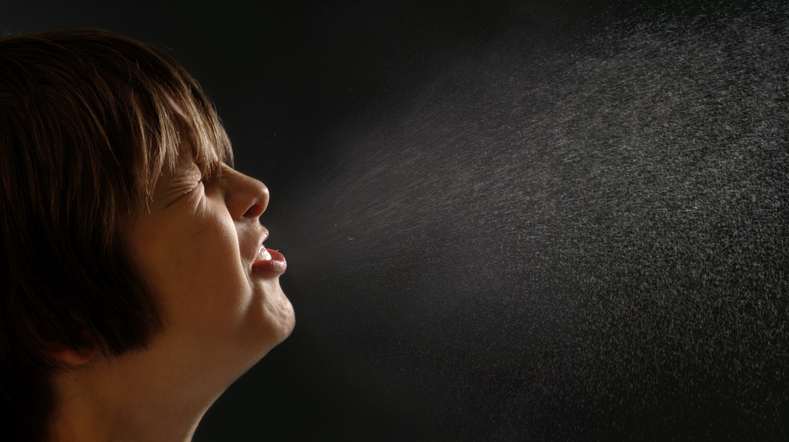 Vladimir Polibuk, a Russian immunologist, said that an individual infected with the Omicron variant can easily transmit the infection to about 100 people just by sneezing.

“So far, we have not had this kind of infection. Measles was considered the most contagious disease, but Omicron surpassed it even in this regard,” Pollibuk added, according to what was reported by Russian media.

The expert pointed out that this mutated virus spreads very effectively through the air through respiratory secretions, such as coughing from one person to another.

“I think that even during speech, normal breathing and yawning, a spray can be released containing particles of saliva and mucus, in which there are enough viruses to infect another person. If a person coughs or sneezes alone, this amount is enough to transmit infection to 100 others,” said Polibuk.

The doctor stressed that Omicron is especially dangerous for children. Since the emergence of the mutated Omicron strain of the virus, several countries around the world have witnessed a rise in cases of the Coronavirus.

Millions of cases have been reported worldwide, and the World Health Organization has said that the highly contagious virus could infect more than half of Europe’s population by next March, while some US officials have predicted that most people will become infected at some point.

Dr. Tedros Adhanom Ghebreyesus, Director-General of the World Health Organization (WHO), warned that Omicron is spreading at a rate not seen in the world since the start of the COVID-19 pandemic. He stressed that the coronavirus variant remains as a dangerous virus despite the fact that it causes less severe symptoms.

“Although Omicron causes less serious symptoms than Delta (the mutant that was dominant until now), it remains a dangerous virus, especially for unvaccinated people,” he said during a press conference.

This mutant, which was discovered in South Africa at the end of November 2021, has since spread widely in the world at levels unprecedented since the start of the epidemic.

This website uses cookies to improve your experience while you navigate through the website. Out of these, the cookies that are categorized as necessary are stored on your browser as they are essential for the working of basic functionalities of the website. We also use third-party cookies that help us analyze and understand how you use this website. These cookies will be stored in your browser only with your consent. You also have the option to opt-out of these cookies. But opting out of some of these cookies may affect your browsing experience.
Necessary Always Enabled
Necessary cookies are absolutely essential for the website to function properly. These cookies ensure basic functionalities and security features of the website, anonymously.
Functional
Functional cookies help to perform certain functionalities like sharing the content of the website on social media platforms, collect feedbacks, and other third-party features.
Performance
Performance cookies are used to understand and analyze the key performance indexes of the website which helps in delivering a better user experience for the visitors.
Analytics
Analytical cookies are used to understand how visitors interact with the website. These cookies help provide information on metrics the number of visitors, bounce rate, traffic source, etc.
Advertisement
Advertisement cookies are used to provide visitors with relevant ads and marketing campaigns. These cookies track visitors across websites and collect information to provide customized ads.
Others
Other uncategorized cookies are those that are being analyzed and have not been classified into a category as yet.
SAVE & ACCEPT
148 shares
Close