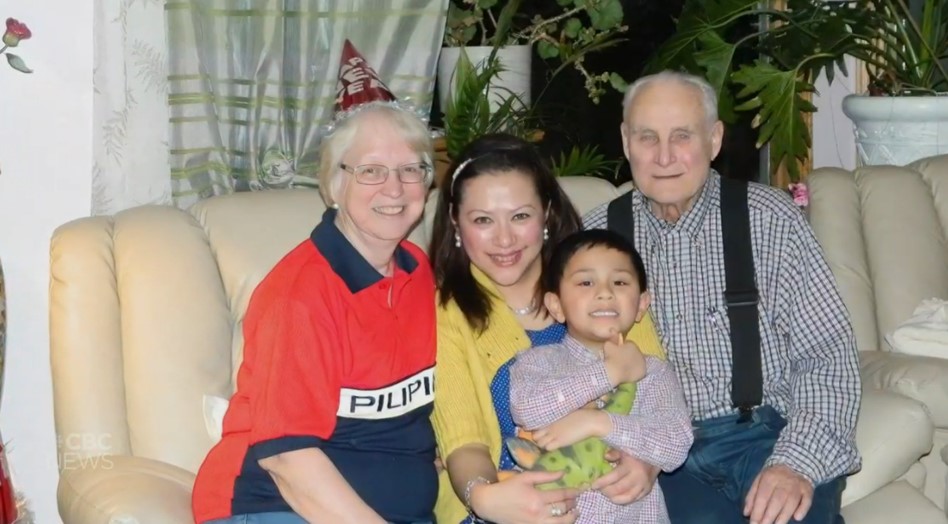 Just like many stories of overseas Filipino workers (OFWs), Dixie Marie Judilla left the Philippines for Canada in 2008 to support her family.

She arrived in Claresholm, about 130 km due south of Calgary, during a December snowstorm. Several days after her arrival, she landed a job at a local Dairy Queen store.

Relatively new in Canada back then, Judilla found herself in a difficult relationship dilemma. She was pregnant at that time.

“Because as a foreign worker, you’re not entitled, you don’t have any benefits and nannies are expensive. So I just cried and said, ‘I think when I give birth I’ll just take my son back home [to the Philippines] and let my parents take care of him. And then I’ll just come back [to Claresholm] to earn money,'” CBC quoted Judilla as saying.

Away from her family, Judilla did not expect that she would encounter an extraordinary act of kindness from near strangers.

Gerd and Elaine Schmidt were retired and living together. A regular customer of Dairy Queen where Judilla worked, he often talked with the Filipino immigrant.

Relating to her situation before as an migrant, Gerd along with his wife offered help to Judilla. They took care of the baby named Dominic allowing Judilla to keep her work and build the future for her baby.

“Staying in Claresholm, I met these good people with a good heart, Canadians who helped me … take care of my son for free without even asking for anything in return,” Judilla shared.

Gerd, who was born and raised in Berlin, Germany, moved to Saskatchewan in 1955 as a farm worker.

“[Gerd] didn’t have any family in Canada, either,” said Elaine Schmidt. “He said when he came over, people helped him, so he wanted to help somebody, too.”

Elaine said the bond between the Judillas and the Schmidts went stronger over the years with visits, meals and holidays they spent together. In fact, Judilla and her son were mentioned in the obituary of Gerd who passed away in 2017.

Elaine later moved to Lethbridge to be closer to her adult children but keeps in touch with Judilla and her kid.

As for Judilla, having fulfilled her dreams, she said she plans to settle down in this rural community where she found joy, friendship and kindness.