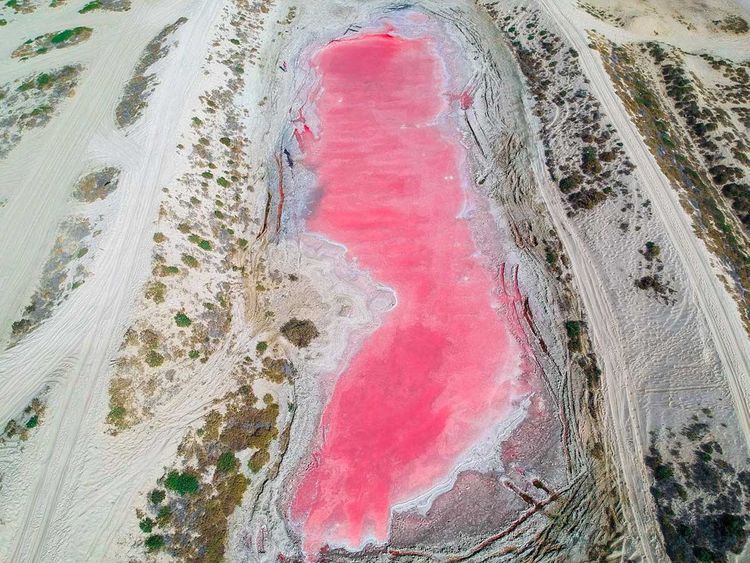 A 19-year-old university student has captured stunning photos of what he called a “Pink Lake.”

Ammar Al Farsi discovered a pink lake near the Ras Al Khaimah coastline. His magnificent shots quickly made the rounds on social media.

According to a report by Gulf News, the teenager took the photos with a drone around 100 meters away from the coast at Saraya Islands, located in the Al Rams area of Ras Al Khaimah.

Al Farsi described the lake to be approximately 10-meter wide and 40-meter in length.

So, how did the lake become pink? Studies explained that Halobacteria and the algae Dunaliella salina (D salina) cause lakes to turn pink, as they both thrive in salty environments. The carotenoid red pigments secreted by Halobacteria and D salina are responsible for the pink lakes’ colors. These same algae also flourish in the Dead Sea.

Dr. Saif Al Ghais, Director General of the Environment Protection and Development Authority in Ras AlKhaimah, said in a report by Arabic daily Al Khaleej that the water discoloration and its transformation to pink is due to the proliferation of red algae, which include more than 4,000 species.

Al Ghais explained that the actual cause for the lake’s coloration cannot be determined until samples are taken from the site, analyzed and scientifically studied. (CC)