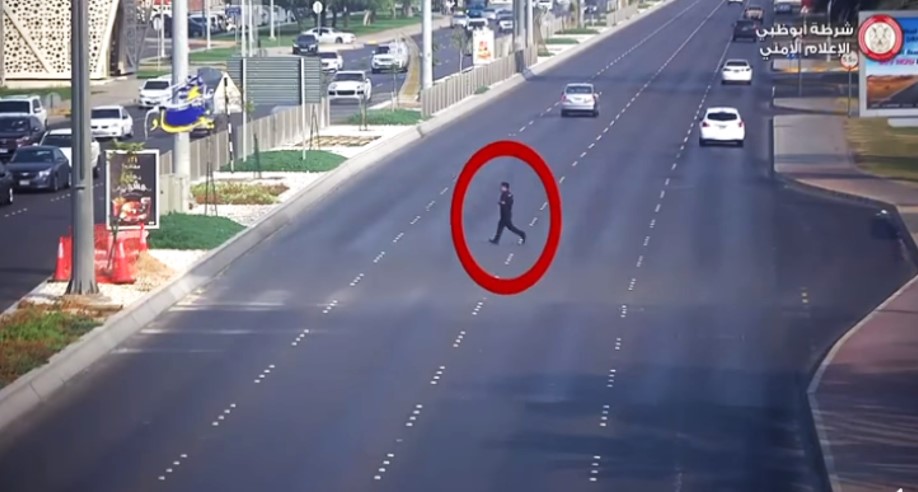 Abu Dhabi Police have reminded residents of the perils of jaywalking through a shocking video of a man who was hit by a car after crossing a non-designated area for crossing.

In the video, the man can be seen running across a busy road in Abu Dhabi. Before reaching the other side of the road, he was hit by a car.

It was unclear if he survived the accident.

While people generally acknowledge the dangers of bad driving, because car crashes are spectacularly horrific, fewer people are ready to concede that jaywalking can be just as much a reason for road deaths.

In 2019, Abu Dhabi Police said that 48,000 people had been fined or detained for ignoring the zebra crossing and crossing roads at undesignated places. Most of the people penalized were those who dodged speeding cars and blindly raced from one side of the road to the other.

“A jaywalker does not accept the reality that the human body is more vulnerable than metal during a collision,” a UAE Ministry of Interior official earlier told the media.

This kind of accident is the last thing that the authorities want to hear or respond to in the midst of tackling a pandemic.

Following the easing of mobility restrictions related to COVID-19, more and more people are stepping out of their house and moving around the cities.

When the UAE government has gone to such lengths to keep people alive and well during a global crisis, fatal accidents caused by jaywalking are among the most undesirable things, according to Abu Dhabi Police.