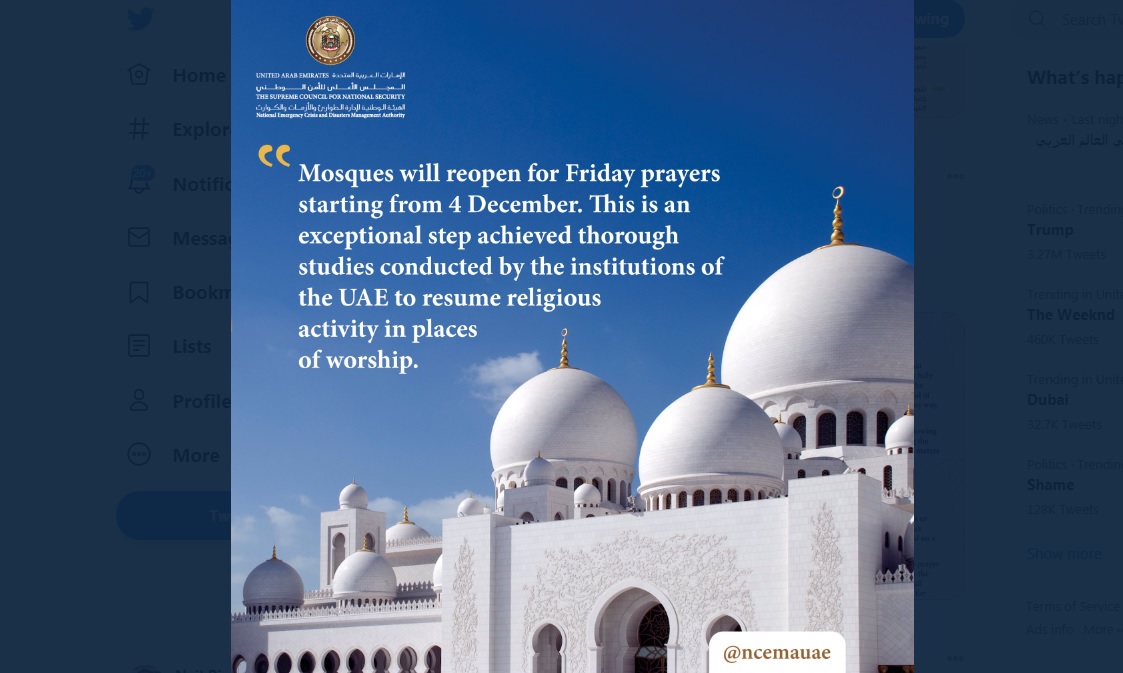 The UAE has officially announced the reopening for Friday prayers at mosques in the country starting next week, December 4.

The National Emergency Crisis and Disasters Management Authority stated that this is in line with the studies conducted by several institutions in the UAE to allow for the resumption of religious activities in places of worship around the country.

Mosques are only allowed a maximum capacity of 30%, and prayers in the outer courtyards and broadcasts over loudspeakers will continue to be allowed provided there’s a safe distance of two meters between worshippers. The entry and exit movements of those who wish to pray should likewise be regulated.

All mosques will be allowed to open 30 minutes before prayers begin every Friday. These doors will be closed 30 minutes after prayers have been performed.

The Fatwa Council of the UAE issued a fatwa that includes an obligation for all groups of society to fully adhere to health & safety instructions issued by the authorities to prevent the transmission and spread of the coronavirus disease (COVID-19) – a rule which is not permissible to violate in any way.

Here are other regulations for the opening of mosques every Friday:

– Duration of Friday prayers speech will not exceed 10 minutes.
– Mosque workers and volunteer teams will organize the entry and exit of worshippers.
– All worshippers must wear a mask and bring their own prayer rug, which must not be left in the mosque or shared with anyone.
– Health procedures also include avoiding exposed surfaces and door handles, adhering to and maintaining spacing and avoiding crowds.
– Worshippers should read from their own personal Qur’an or smart device, as well as downloading UAE-approved health apps and activating them while attending the mosque.
– Ablution must be performed at home
– Senior citizens, children, and those with chronic or respiratory diseases and those suffering from weak immunity should perform prayers at home, based on a fatwa from the Fatwa Council of the UAE.
– The closure of ablution places, toilets, and women’s prayer halls will continue, and authorities will announce a change in the times of daily prayers by 15 minutes before the call for prayers, and 10 minutes after prayers, except for Maghrib prayers, which will be called 5 minutes before the call for prayers.
– We stress a ban on distributing food and water.
– Mosques and churches in industrial areas will also continue to be closed.