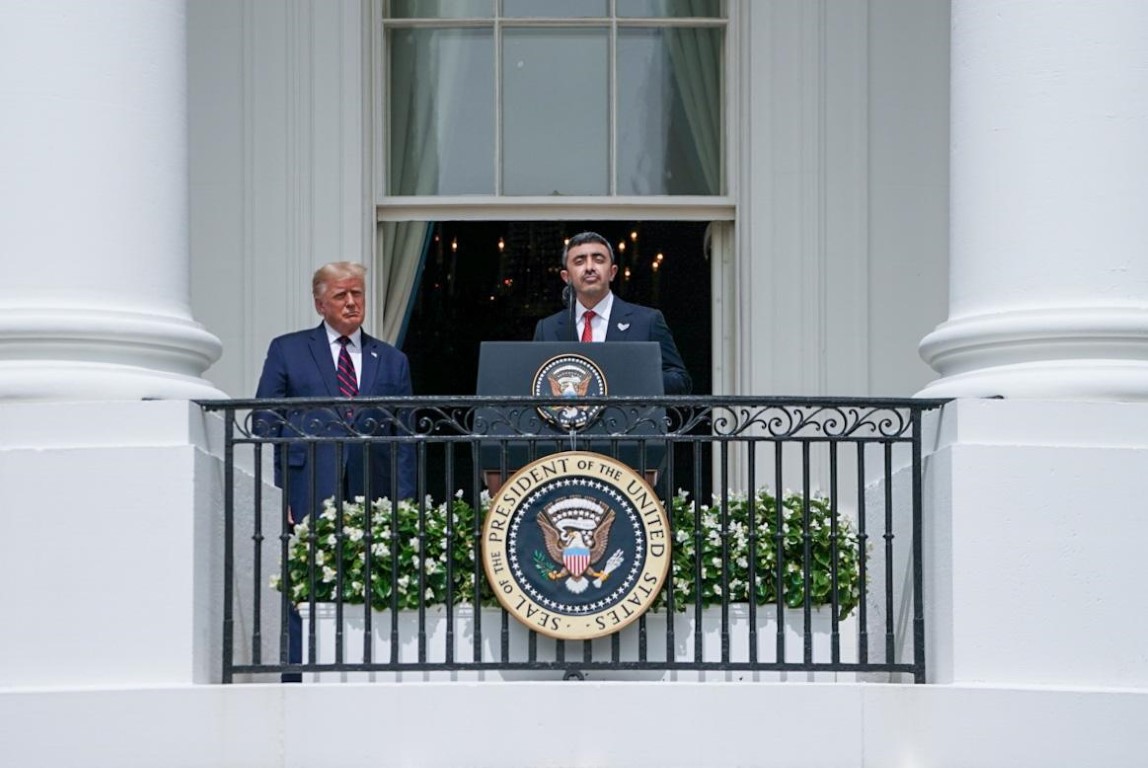 H.H. Sheikh Abdullah bin Zayed Al Nahyan, UAE’s Minister of Foreign Affairs and International Cooperation, highlighted during his keynote speech at the White House for the official signing of the peace agreement between the UAE and Israel, that the UAE is extending a hand of peace to achieve solidarity among Arab nations for the betterment of the entire Middle East.

The so-called Abraham Accord was the first peace agreement signed by Israel with a major Arab country in a quarter of a century since 1994.

In his remarks, H.H. Sheikh Abdullah said: “We have come today to tell the world that this is our approach, And that peace is our guiding principle.”

He also commended that parties involved in the historic peace pact, which he termed as “a change that will send hope around the world.”

Below is the full text of the remarks:

I am pleased to convey to you the greetings of the leadership and people of the United Arab Emirates, and notably, His Highness Sheikh Mohammed bin Zayed Al Nahyan.

In our faith, we say, “O God, you are peace and from you is peace.” The search for peace is an innate principle, yet principles are effectively realised when they are transformed into action.

Today, we are already witnessing a change in the heart of the Middle East, a change that will send hope around the world.

This initiative would not have been possible without the efforts of President Donald Trump and his team who worked hard and sincerely for us all to reach here, most notably my counterpart, Secretary of State Mike Pompeo, and Jared Kushner, Senior Adviser to the President of the United States, and all those who are genuine about the principle of peace in the United States, who have strived to realise this major achievement: thank you.

I also thank the Prime Minister of the State of Israel, Benjamin Netanyahu, for halting the annexation of the Palestinian territories, a decision that reinforces our shared will to achieve a better future for generations to come.

Ladies and gentlemen, We are witnessing today a new trend that will create a better path for the Middle East.

This Peace Accord, which is a historic achievement for the United States of America, the State of Israel, and the United Arab Emirates, will continue to have a positive impact, as we believe that its reverberations will be reflected on the entire region.

Every option other than peace would signify destruction, poverty, and human suffering.

This new vision, which is beginning to take shape as we meet today for the future of a region full of youthful energy, is not a slogan that we raise for political gain, as everyone looks forward to creating a more stable, prosperous, and secure future.

At a time when science is prevailing, the region’s youth are looking forward to taking part in this great humanitarian movement.

We are pleased that the United Arab Emirates will be part of the momentum towards stability and the growth of human potential, in a new civilised approach that opens wide the doors of opportunity for those who look towards peace, prosperity, and the future.

Our societies today possess the foundations of modern human development, such as infrastructure, a solid economy, and scientific achievements that will enable them to advance the future of the Middle East.

Mr. President, The United Arab Emirates believes that the role of the United States in the Middle East is positive, and this belief is evidenced by the Accord that we are signing today at the White House, for which you have taken the lead, and will remain a beacon in human history for all peace-loving people around the world.

And, as for us in the United Arab Emirates, this Accord will enable us to continue to stand by the Palestinian people, and realise their hopes for an independent state within a stable and prosperous region.

This Accord builds upon previous peace agreements signed by Arab nations with the State of Israel.

The aim of all of these treaties is to work towards stability and sustainable development.

Ladies and gentlemen, In this difficult year when the world is suffering from the repercussions of the COVID-19 pandemic, the United Arab Emirates has reinforced its humanitarian commitments, established by our nation’s Founding Father Sheikh Zayed, who taught us that standing with others, regardless of religious or ethnic affiliation, is a humanitarian duty and a firm principle.

During this difficult time, the United Arab Emirates was able to launch a probe to Mars.

The ‘Hope Probe’ indeed represents hope that our region is capable of advancement and progress, if governments and people embrace science.

After the United Arab Emirates sent astronaut Hazza Al Mansouri last year as the first Arab astronaut to reach the International Space Station, and launched a peaceful nuclear power plant, this Accord opened up prospects for a comprehensive peace in the region.

The advancement of nations requires sincerity and persistence.

We have come today to tell the world that this is our approach, And that peace is our guiding principle.

Those who begin things in the right way, will reap bright achievements, with the grace of God.