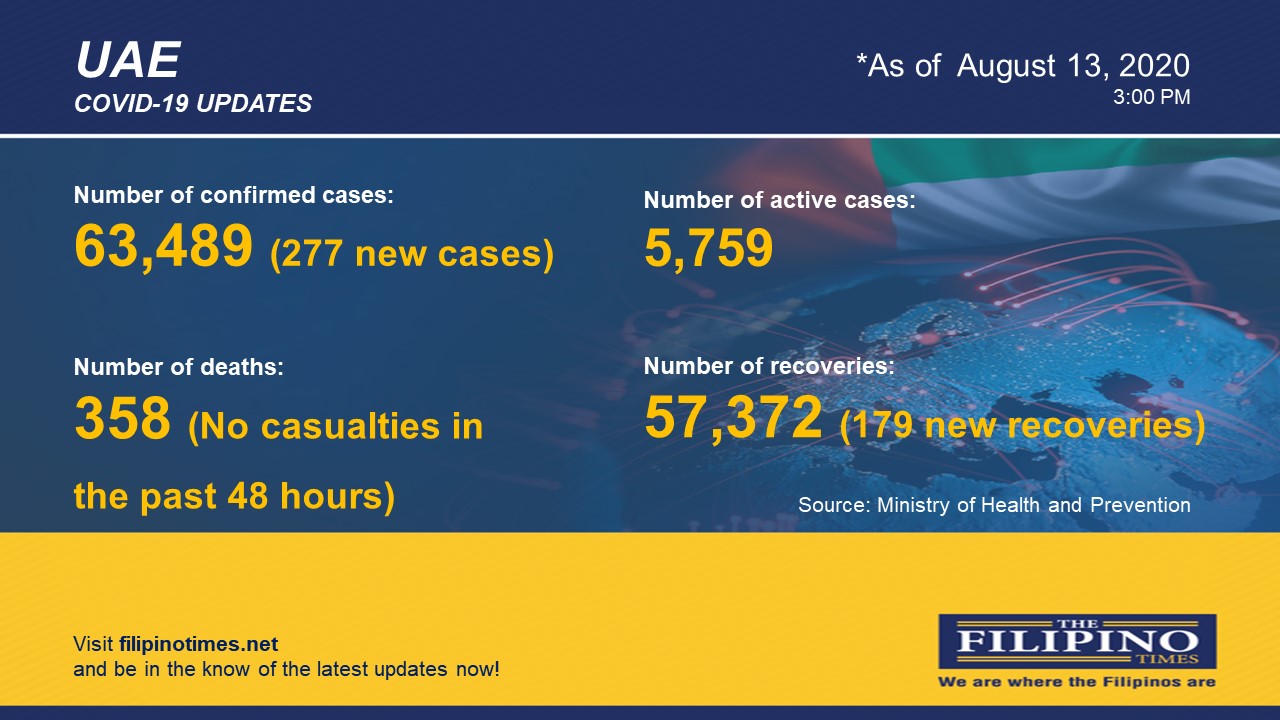 The Ministry of Health and Protection (MoHaP) recently conducted additional 68,964 tests that led to the discovery of 277 new cases, bringing the total number of confirmed COVID-19 patients to 63,489.

The ministry also reported that no one has died of COVID-19 for the past 48 hours. The country’s total death toll remains at 358.

In addition, the UAE has reported over 179 fully recovered patients, with the total now at 57,372.

His Excellency Dr. Abdul Rahman Al Owais, Minister of Health and Prevention praised the role of the front line medical teams and first responders and their great efforts since the beginning of the pandemic Al Owais added that the early detection of cases and the application of advanced treatment protocols contributed to a continuous increase in the rates of recovery, with the ratio now reaching nearly 90%, giving the UAE among the highest rates of recovery in the world.

Al Owais stressed that social visits and communication without observing the rules of physical separation constitute the greatest challenge in the battle against COVID-19, and he asked that the public’s commitment to observing preventive measures would help to preserve the current successes and help to achieve greater achievements in the future.

Dr. Al Hammadi, official spokesperson for the UAE government, stated that the increase in COVID-19 cases were due to social and family gatherings. He urged the public to adhere to the country’s preventive measures even within private gatherings.

“Unlike people’s behavior at public places, which is subject to mandatory measures like social distancing and face mask wearing, private and family gatherings are not,” said Dr. Al Hammadi.

Dr Al Hammadi also warned against using products that claim to stimulate the immune system against the virus, as they often exploit people’s fear and anxiety. He stressed the need to continue to wear masks because of their ability to limit the spread of the virus, which is transmitted mainly through direct contact with the infected, and through spray coming from coughs and sneezes.