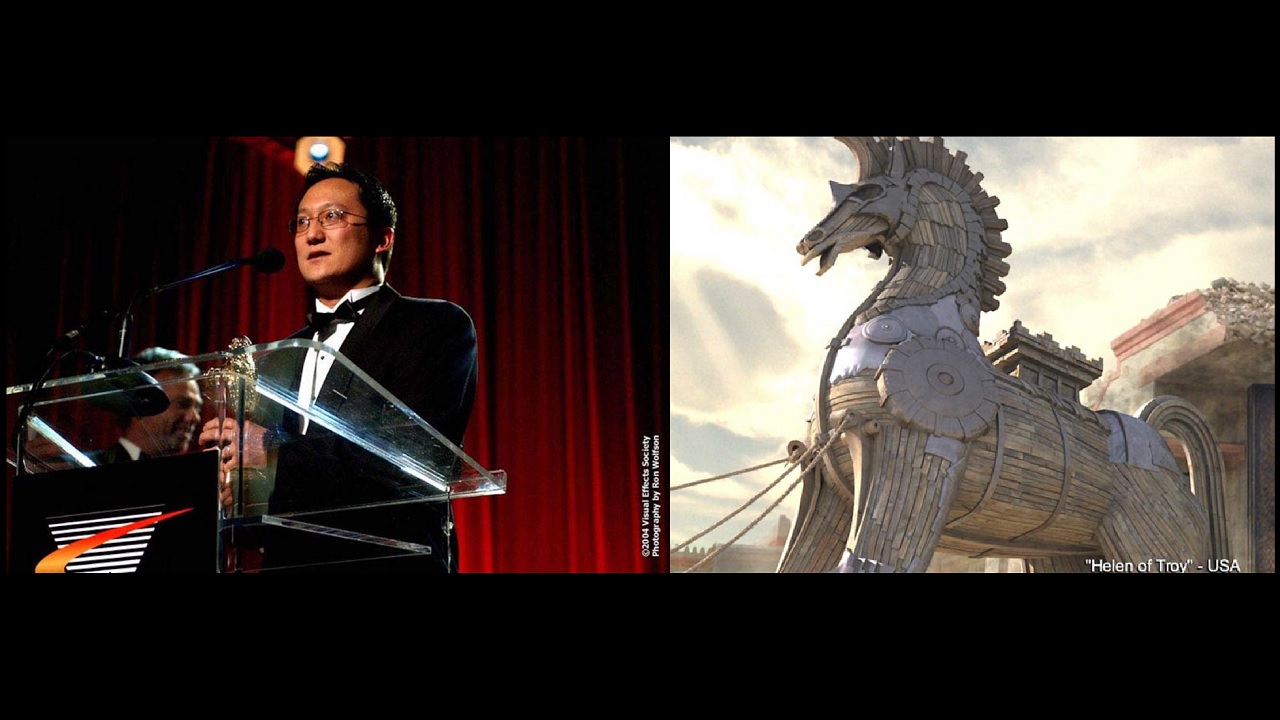 In pursuit of a better life for his family and his dream of becoming a part of the people behind the Hollywood visual effects industry, Anthony Ocampo went to US in 2000.

Ocampo, one of the people behind the stunning visual of effects of film Helen of Troy, he went to US applying for all effects companies in Hollywood by sending his resume and demo reel.

It took him a month of job hunting, before he landed a staff job at Stargate Studios founded by Sam Nicholson.

He told Inquirer he quit his job at GMA in the Philippines to pursue his dream in Hollywood, bringing his family on a tourist visa.

Ocampo is the son of stage actress Vivian Climaco of Cebu and diplomat Tino Ocampo from Sta. Rita, Pampanga, where he traces his artistic roots.

Ocampo belongs to a family of artists, with Galo Ocampo, well-known muralist and painter, among his distant relative.

“My grandfather is a carver. My dad didn’t pursue his art but is very good at carving and painting.”

At the age of 7, he was able to create realistic sketches with Jurassic Park fueled his dream to become 3D artist.

He studied fine arts at the University of the Philippines and landed a job at GMA as multimedia artist in 1996.

Ocampo was no stranger to living overseas as he was born in Japan and lived in Kuwait due to nature of work of his father.

He took a risk in 2000 and went to the US to pursue his passion.

“3D artists were in great demand back then. I took a leap of faith and quit my job in the Philippines,” he recalled.

Unlike other immigrants, Ocampo said he did not experience discrimination due to his nationality or color despite having a job in a company where workers are pre-dominantly white people.

“My co-workers are great people and great artists and treat me like everyone else,” he says, though he said that it was intimidating because he did not know a thing or two about the process and terms.

He admits he only had a background in software but didn’t know the process like how 3D tracked in with the footage or was composited into live-action.

Ocampo says he did not have proper training or attend computer graphics school.

But his eagerness to learn new things while working and watching tutorials on YouTube, helped him excel.

His perseverance has been rewarded with multiple recognitions starting with Helen of Troy gave him his first Visual Effects Society (VES) award for his rendition of a 3D Trojan horse back in 2004.

Ocampo and the Stargate team also won various VES awards and Emmy nominations for The Walking Dead and Grey’s Anatomy.

READ ON: OFW daughter could be the first Fil-Am in US Congress

Unlike other Filipino animators who have introduced their culture in the films Ocampo sticks to what his client wants.

“Clients are very specific in what they want and often noodle every pixel until they get the effect they want,” he said.

Ocampo believes that many aspiring Filipino artists can dominate the global scene with their world-class talent though he acknowledge there only few VFX studios in the Philippines.

“Right now, Fuse FX is in dire need of outsourcing work due to tracking and rotoscoping companies outside the U.S. being completely booked,” Ocampo says adding this could be the chance to have more presence in Hollywood.

He advised aspiring Filipino artists not to lose their dream. “You don’t have to work in Hollywood to be a successful VFX artist,” Ocampo says pointing out that many movies have their effects done outside US.

“In the end, it’s still an art and not about punching numbers into a console.” (RA)