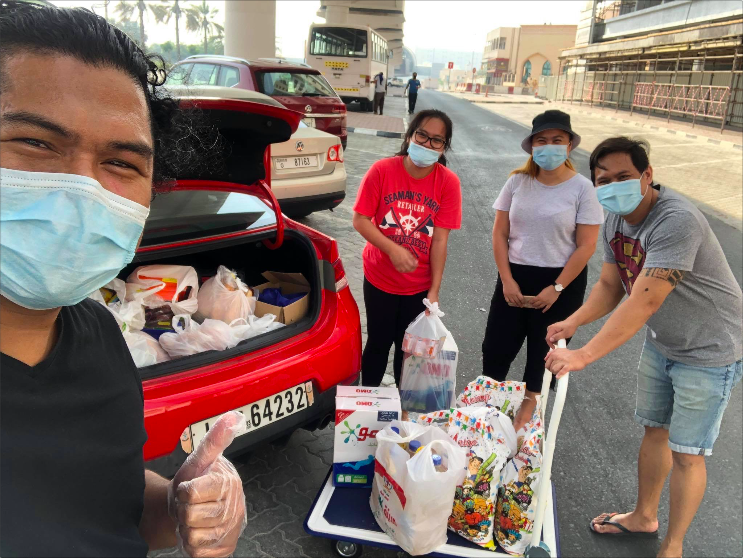 A Filipina in the UAE, who has suffered from a massive pay cut due to the economic impact of coronavirus disease (COVID-19), has initiated aid to over 1,000 Filipinos in the region—proving that one does not need to be rich or stable to help.

Shiela Jane Capatan-Reyes, 33, said that she knows the struggle and hardships of Filipinos affected by the pandemic, noting that she has had her salary cut and her husband put into forced unpaid leave.
She added that their situation pushed them to start providing help for other Filipinos who had been displaced by the crisis. They began by delivering goods straight to the doorstep of people in need.

“I was deeply heartbroken knowing that many of our Kababayan ay sobrang naapektuhan sa pandemic na ito lalong lalo na ang mga nawalan ng trabaho, naka-unpaid leave, stranded, at mga parents na biglang nawalan ng work at may mga anak na kasama dito. We wanted to be there on the time when needed the most, when people could not go out para makapag-abot ng tulong o makahingi ng tulong,” she said.
Reyes said their friends got inspired to take part in the project, and from there, it became a big platform for Filipinos who wish to help, and those who need it. “Nakapag-abot na po tayo ng tulong to more than 1,000 distressed Filipinos in the region and the numbers are still growing to date,” she said.

Utilizing the power of online deliveries, Reyes said the initiative—which they call SagipKabayan—serves as a platform to connect helper and beneficiaries. Reyes and her team screen the sponsors and match them to their own beneficiaries, so they can send the help themselves “Wala pong dumadaan na pera sa amin, ang pamimigay ng grocery items is done directly from donor to beneficiary,” she noted.
Aside from distressed OFWs, Reyes said they have also provided aid to children in need—particularly in terms of milk, diapers, and vitamins for them.

“I always believe in paying it forward, and that one doesn’t need to be rich to help and make a positive impact to the lives of other people. Although deeply affected by the pandemic myself, that didn’t stop me from helping during these difficult and trying times,” said the Reyes.