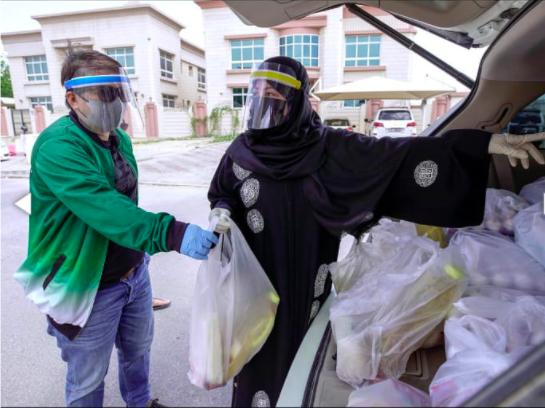 A Filipina based in Abu Dhabi is earning praises in the community as she provides food and essential needs to Overseas Filipino Workers (OFWs) affected by coronavirus disease (COVID-19) by spending more than half of her monthly income.

Mona Mohamed Baraguir, 39, said that she began this initiative when the pandemic started, and when she learned just how many Filipinos were left redundant or under no-work-no-pay status as businesses grapple to survive the economic effects of the virus.
The Filipina was naturalized as an Emirati after marrying a local two decades ago. She has since been divorced, and has been receiving a monthly alimony payment of Dhs8,000—around Dhs5,000 of which she pledges to purchase essentials for the affected OFWs.

“Naisip ko itong gawin dahil sa kagustuhan kong makatulong sa mga kababayan kong nangangailangan sa ganitong sitwasyon,” she said. “Nakakataba ng puso na sa ganitong paraan nakakapag-abot ako tulong sa mga kapwa ko Pilipino, lalo na ngayong oras ng krisis.”
Baraguir, who originally hailed from Sultan Kudarat, said that has now done seven aid initiatives—providing a lending hand to Filipinos who have been terminated from their jobs or have been placed on unpaid leave. She said that they message and call those who in need and go to their neighborhoods in order to hand them their relief packs.

The mother of four, however, said the success of her project would not be possible without the help of her kids, family, and friends.
“Naisakatuparan ko itong pagbibigay ng ayuda sa tulong ng aking pamilya at malalapit na kaibgan. Katu-katulong ko sila mag-repack, sumagot sa mga mensahe ng ating kapwa Pilipino, at magpamigay,” she added.

She encouraged everyone who are in a stable position to help fellow Filipinos, especially since she said being in a foreign land during this period is can be challenging and gloomy.
Baraguir also mentioned the importance of keeping the “bayanihan” spirit alive, and that any kind of help—no matter how small—can be immensely important to keep the hope alive.