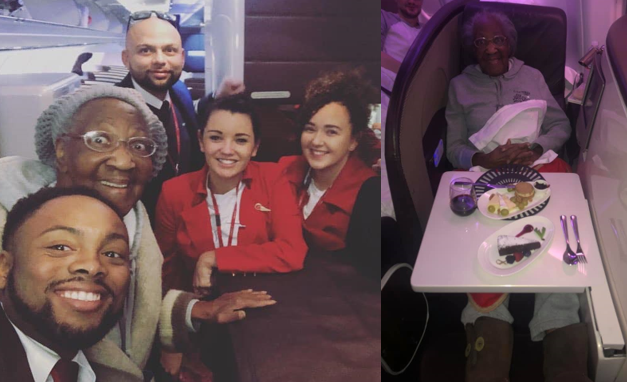 A kind-hearted man fulfilled an elderly woman’s dream to ride on first-class seat of a plane.
Violet, an 88-year-old woman, had an economy ticket for a Virgin Air flight enroute from New York to London earlier in December 2019.
But instead of seating in the economy, she sat on the first class after a man named Jack offered to swap seats with her.
An attendant who was on board that flight shared the heartwarming story on social media.
Jack and his family purchased seats in our upper class cabin for a flight home from New York, but when he got onboard, Jack went and found violet in economy and swapped seats with her,” she wrote on her post.
The two met earlier at the airport, according to Leah May.

“He then sat on the row of seats directly next to the economy toilets and never made a peep or asked for anything the rest of the flight. No fuss, no attention, literally did it out of the kindness of his own heart, no one asked him too,” she narrated.
She said Violet had worked as a nurse in both the UK and US and was flying back to London after visiting her daughter in New York, whom she hadn’t visited for a while because of knee replacement surgery.
The attendant said Violet cannot contain her happiness now that her lifetime dream has come true.
The elderly woman told the attendant that her daughter won’t believe her so she asked for a ‘selfie’ to prove it, but didn’t have a phone or an email address.
The attendant then printed the photos of Violet enjoying the first-class seat and send it to email.