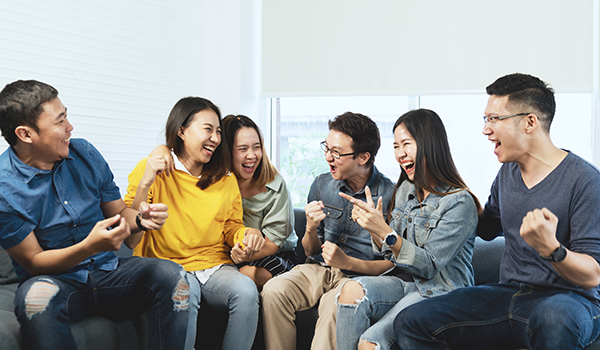 One of the best traits of Filipinos, no matter where they are in the world, is their ability of adapt to changes. They easily assimilate themselves with their new environment and find ways to mold themselves towards getting into the mindset that the place is their new home away from home.

This is especially true in the UAE where almost a million Filipinos reside, making up the third largest population of expatriates in the country through more than 40 years of their presence in one of the youngest countries in existence in the world.
As the number of the Filipino community in the UAE grows, they have since unknowingly created a few notable jargons that easily distinguish those who have stayed here for quite a while now as compared to those who have just arrived in the UAE.

“Studio, flat, o bedspace – all in na ba yan?”
A basic need for Filipinos in another country is place where they come home to at the end of the day. Majority of Filipinos, in their attempt to save up on costs, share flats and bedspaces with fellow Filipinos with a mere few opting to go solo on studios. When Filipinos rent, they likewise ask if the rent they’re paying monthly is ‘All in’ – that means to ask if the rent includes DEWA (electricity and water), Internet, Gas for cooking, usage of appliances, and more.

“Humid/may sandstorm sa labas.”
You’ll get to enjoy the sun majority of the days you’ll spend here in the UAE with the occasional rise of humidity and experience of sandstorms. Arguably, the most awesome weather can be experienced during the ‘winter’ months, where the cold breeze envelops the entire country, making the ideal environment for long walks and outdoor bonding times.

“Tara, crabbing tayo!”
Speaking of quality bonding times, one of the most notable activities that many Filipinos in groups engage in is the “Crabbing / Halaan” activity. This is where several Filipinos gather their buckets, head towards the shores and waters of the UAE to catch clams, fish, and yes – crabs! The quantity of the seafood they catch depends if they arrive during low tide or high tide – but they still manage to catch fresh seafood for free at selected, authorized areas in the country.

“Haram yan – baka ma-baladiya ka.”
While the UAE is a pretty open and tolerant country, its citizens, particularly the expat populations are always reminded by the authorities to adhere to the rules and regulations of the country. Things and/or situations that are considered ‘haram’ include public display of affection, smoking in public places, wearing revealing clothing among the rest. These particular actions increase your risk of being noticed by the ‘Baladiya’ – the Arabic term for Police and the authorities. Thus, these two Arabic terms became synonymous to warning fellow Filipinos against doing forbidden actions that can land them in trouble.

“Mafi fulous.”
On a lighter note, another popular Arabic term with Filipinos is “Mafi Fulous” which means having no money in their pockets. You will hear this often during payday from Filipinos. It’s as if they want to tell you their salary just slipped through their fingers. It magnifies their monthly selfless act of sending money back home every month but burn a hole in their pockets. Sans money, no problem. They will get by with a smile.

“May laman pa ba nol mo?”
In the UAE, the main modes of public transportation – the Metro and the Bus, both require the use of cards to access. In Dubai, there’s the nol card that individuals can easily recharge at metro stations to be used on the Dubai Metro, public buses and even taxis. In Abu Dhabi, they have the Hafilat card that they use for public buses. Filipinos are always wary to not only have a certain amount of money in their cards, they’re also conscious of tapping in and out of the public transportation as not doing so would result to fines during random checks with a minimum fee of Dh200.

“Parating na visa ko, pero kailangan ko muna mag exit.”
Filipinos who managed to shift from one job to another are usually required to do an ‘exit’ as part of their transition to a new working visa. In the past few years, many Filipinos find their way to spend a few days at countries including Oman, Georgia, or Armenia during this transition. Fortunately, the UAE has since launched options for workers to not be required to exit the country anymore at an additional cost to finish processing their working visa.

“Okay ito – pandagdag sa box.”
With the interests of their loved ones back home at heart, one of the most popular phrases that you’ll hear around when you’re at shopping sales in malls and grocery stores are Filipinos talking about discounted deals of laundry powders, shampoos, toothpaste, soaps, chocolates, food, and other items that they buy in bulk to fill out their balikbayan box. This strikes true more so during the –ber months as they wish for their package to make it back home in time for Christmas as their gift, especially if they wouldn’t be able to fly back home to their families.

“Hello, my friend – please (task)”
Being the courteous, respectful and kind-hearted citizens that we are, most Filipinos would approach individuals from other nationalities with the term ‘my friend’ – in an attempt to seek assistance in a myriad of ways. The term ‘my friend’ gets a stranger from an apprehensive state to a more jovial, affable mindset making it easier for Filipinos to get help and guidance from someone that they think could help them find their way on the streets, ask for the washroom, look for a certain place, and more.