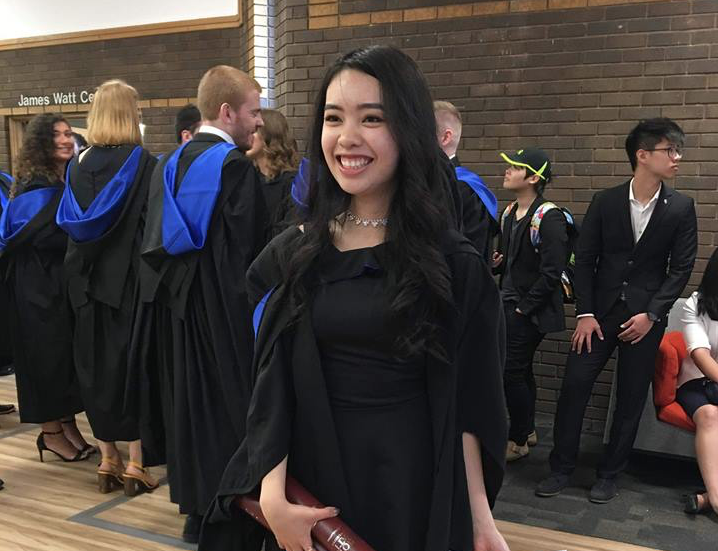 The flag of the Philippines is held high once again as 22-year-old Christine Carandang, the only Filipina of the batch for Bachelor of Mechanical Engineering from Heriot-Watt University from Edinburgh, Scotland, graduated with Honours of the First Class with an offer to go straight to PhD at a young age. She also won the prestigious “Best Project Prize” from The Institution of Mechanical Engineers, an international organization for Mechanical Engineers established in 1847 having over 120,000 members worldwide. Christine shares her journey on how she managed to course through her own trials that opened opportunities for her future.

Christine discovered her love for Chemistry, Physics, and Math throughout her AS and A levels through examinations conducted in a British curriculum during her 11th and 12th grade respectively. She then knew that she’ll pursue an engineering course but wasn’t sure which field to choose. “I wanted to expand my potential future fields by choosing a degree that can be applied in a wide variety of industries and overlaps with other disciplines,” said Christine. She ended up choosing Mechanical Engineering with the guidance and perspective of her father who graduated as a Civil Engineering, and Environment and Sanitary Engineering.

With the grades that she managed to get from 9th grade onwards, she managed to not only secure a scholarship at Heriot-Watt university, she was also offered to become a second-year direct entry student, skipping both her foundation year and first year.

The path towards graduation wasn’t easy at all as Christine also struggled with time management. “Being the class representative, a student ambassador, a final year student, and living on my own meant I had to find a balance in fulfilling all of these roles. Planning a monthly schedule helped me visualize what else I can do to make the most of my time and effort,” explains Christine.

She also adds that she didn’t think that being the only Filipino was a challenge as she turned that into an asset as she studied through the years. “I think it made me memorable to my professors since in a way, I was unique,” she said.

Now that she has graduated, Christine is now at a crossroads of deciding whether to find a job at the Philippines or here in the UAE. In addition, another surprise came to Christine as she was offered to skip her Masteral degree and pursue PhD directly. “I have been offered to pursue a PhD with my mentor at Heriot-Watt University in Edinburgh. I was encouraged by my parents to discuss this opportunity with my mentor who ensured me that I am qualified for this. With all these options, I am still not sure if I’m going to pursue this path but I’m not that worried because I believe that everything will happen according to God’s will,” said Christine.

Christine advises young students to be proactive and flexible as they go through the new environment of college life: “Choose a degree that you are interested in, that way you can work and study in your chosen field with the passion and motivation to learn more while being happy and content.”