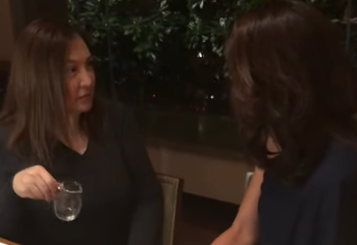 In what could be a rare reunion since their blockbuster hit ‘Bituing Walang Ningning’, megastar Sharon Cuneta and Cherie Gil made it sure to spend quality time together.

The two had a fun dinner on Saturday together with Cuneta’s children Frankie, Miel, and Miguel.

Cuneta and Gil went on reminiscing their roles in the 1985 classic ‘Bituing Walang Ningningm where Cuneta played Dorina, an aspiring singer who overshadowed Gil’s character Lavinia.

One of the movie lines “You’re nothing but a second-rate, trying hard copycat” became an immortal part of the movie.

Cuneta and Gil first recreated their old photo where the two of them embraced each other.

And then they went on reenacting the ‘copycat’ scene of the film. But this time, they switched roles.

Cuneta and Gil took a while before they finally get the scene right with so much laughter in between.

So should the two exchange roles if a remake of Bituing Walang Ningning comes along? or stick to their old ones?