Play Girls, a sexy girl dance group, said that they would like to “heat up the night” with their performance on the episode of “Pilipinas Got Talent” which was aired on March 3.

The group named Play Girls said they decided to audition for the show by performing a provocative dance number in a carwash setup.

Angel Locsin, one of the judges of the show, was not impressed by the performance and immediately hit her buzzer to reject the group.

After performing, Locsin’s co-judge, Vice Ganda admitted that he was also confused with the group’s performance and asked them what they did.

When asked about what their talent was, one of the members of the group answered “car washing”.

Vice Ganda didn’t consider the group’s performance as an act worthy of the show’s cash prize, and he eventually turned them down for the competition.

Locsin said that she does not want men to objectify women, that is why she decided to hit her buzzer.

Robin Padilla, another judge, disagreed with Locsin saying that their suggestive dance number is not a problem as long as the dancers are “okay with it”.

Rephrasing his question, Padilla asked the Play Girls if they are enjoying what they are doing, to which the girls replied yes.

As tension was beginning to rise between Locsin and Padilla, one of the members defended their performance saying that it is their talent.

But the group was not able to advance in the competition after Locsin and Vice Ganda said no.

After the performance was aired, members of Play Girls took it to Facebook to attack and criticize Locsin for not supporting their performance. 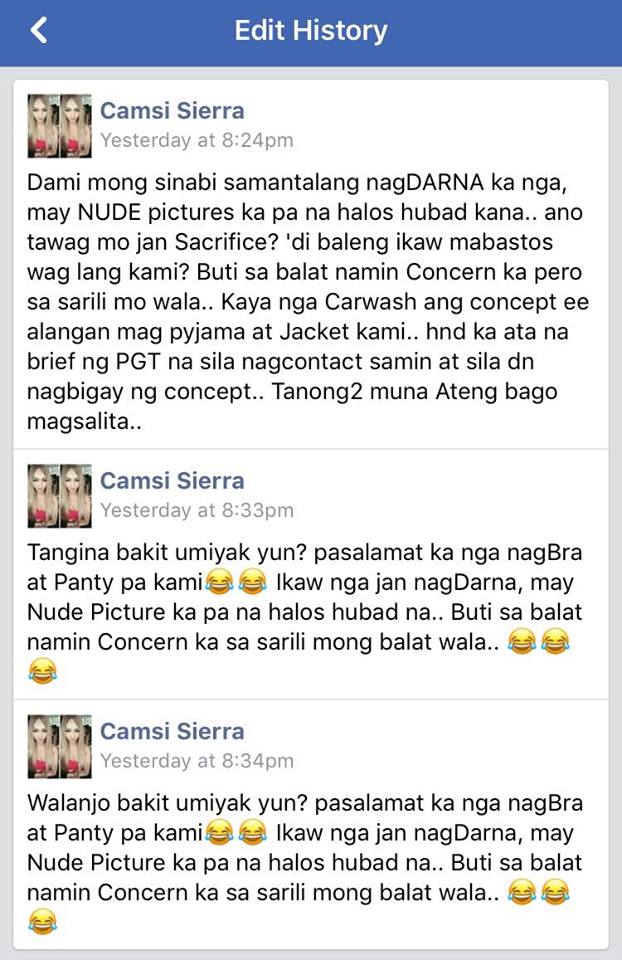 Locsin has aired her opinions regarding the criticism she has received after the show.

“There is no such thing as a “slut” or a “non-slut.” There are women,” she said on Twitter.

there is no such thing as a “slut” or a “non-slut.” There are WOMEN. https://t.co/VXyxRAgrNZ

Nevertheless, Locsin was highly praised by netizens who saw the episode for uplifting feminism and women’s rights.

Be the Angel Locsin who fights for real talent and self-worth in PGT.#PGTSuperFiesta

Kudos to Angel Locsin for standing her ground; to spread awareness and her advocacy which is women’s rights. ?? #PGTSuperFiesta

Be an Angel Locsin in a world of Robin Padilla #PGTSuperFiesta

I SO LOVE ANGEL LOCSIN FOR STANDING AGAINST OBJECTIFICATION OF WOMEN ON NATIONAL TV!!!

Mabuhay ka Angel Locsin. Much respect for this woman who values women the way she does

Be the Angel Locsin in this world full of Robin Padilla. PGT is clearly for talents not strippers. Idk why Robin and FMG voted "yes" due to entertainment raw? Na-arouse ba kayo? Lols.