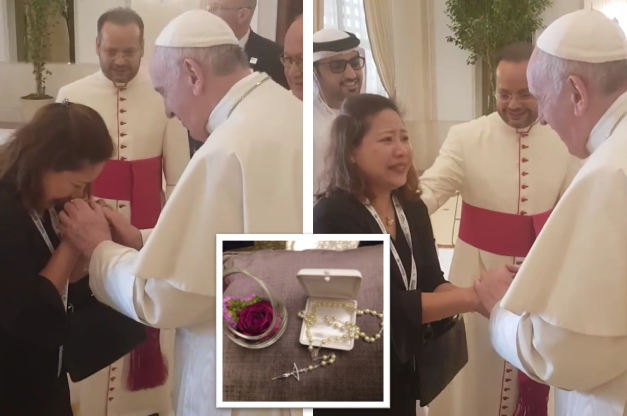 The visit of His Holiness Pope Francis, Head of the Catholic Church, is definitely a boost for Catholic faithful in the UAE, and a personal encounter with His Holiness is a memory that an overseas Filipina worker will have for the rest of her life.

OFW Sally Mallari cried when she was given an opportunity to meet Pope Francis in Abu Dhabi, February 4.

As seen in a video uploaded on Facebook, Mallari cannot contain her tears as cleric members tell her not to cry when she found out that she was going to meet the Pope.

His Holiness, along with his aide, can be seen walking towards her and the Filipina timidly approaches the Pontiff.

Then, Mallari kisses the hand of His Holiness to pay respect.

A few hours after her encounter with the Holy See, Mallari posted on Facebook a rosary that was personally given to her by the Pope.

Mallari used to work as a cashier assistant in a supermarket in Dubai. She is a mother of two and has been widowed for 13 years.