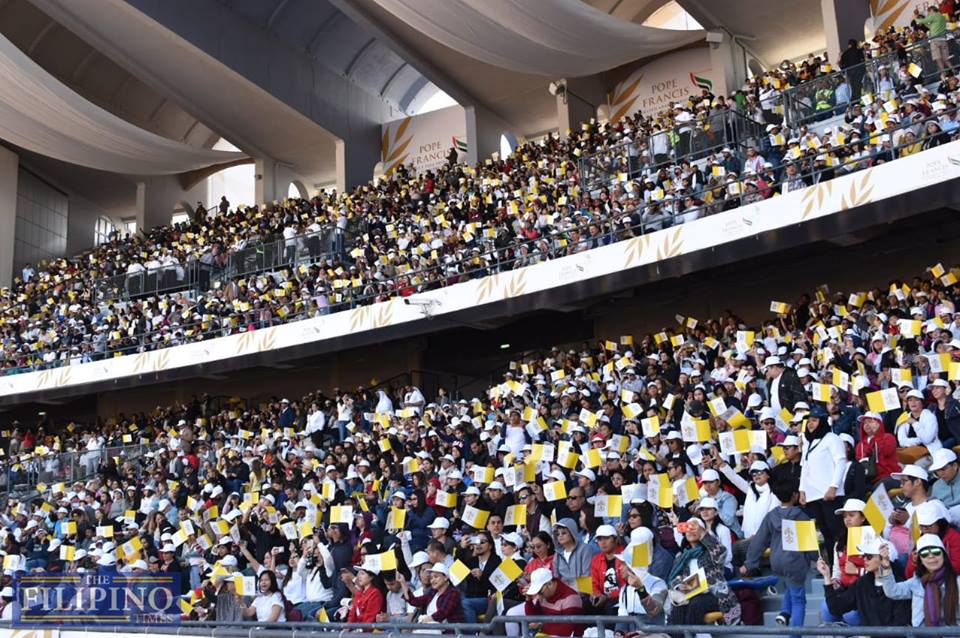 Thousands of Catholic faithful, including overseas Filipino workers across all emirates of the UAE, came together to witness the historic visit of His Holiness Pope Francis that will culminate with the celebration of a Papal Mass to be held at Zayed Sports City Stadium today, February 5, 2019 from 10:30 am onwards.

With over 1 million Catholics all across the UAE and millions more from overseas, only 135,000 people had the rare opportunity to attend not only one of the few Papal Masses done outside Vatican City but also the first-ever in the history of MENA that a Pope celebrated a mass in the region.

The mass also saw a 120-member choir, composed mostly of Filipinos, with Filipina conductress Joy Santos spearheading the multi-cultural voices who will sing hymns in English, Arabic, and Latin.

Many Filipinos had camped out the night before at hotels and locations near access hubs scattered across the UAE. Ecstatic and filled with eagerness to meet the Pope, they made sure they get to the venue early, as the first batch of buses left as early as 10:00 pm in the evening of February 4 to head towards the venue.

The visit of the Pontiff is a positive response to the invitation of His Highness Sheikh Mohammed bin Zayed Al Nahyan, Crown Prince of Abu Dhabi and Deputy Supreme Commander of the Armed Forces of the UAE together with His Eminence Dr Ahmad At-Tayyeb, Grand Imam of Al Azhar Al Sharif, who welcomed the Pope as he arrived from the Vatican.

The Papal Visit is a testament to the UAE’s ‘Year of Tolerance’ as the short visit was in conjunction with the celebrations of the ‘International Interfaith Meeting on Human Fraternity’ that saw the Muslim Council of Elders together with Pope Francis as well as different leaders from various religions around the world converge in a dialogue to pursue paths of mutual agreement and build bridges towards unity and harmony for years to come.

The Pope is expected to leave the United Arab Emirates around 1:00 pm, following a farewell ceremony at the Abu Dhabi Presidential Airport.